John Matthews, a resident of Prairie Village, KS and Scottsdale, AZ, was conferred the decoration, Order of the Sacred Treasure, Silver Rays, by Emperor Naruhito on November 3, 2019, and the decorationwas presented to him by the Consul General of JapaninChicago, Mr.Hiroshi Tajima,in a ceremony at the Consul General’s official residence on October 28, 2021. The presentation had been delayed several times due to the Corona virus pandemic.John was conferred thisimperial decoration for meritorious service at the Consulate General of Japan at Kansas Cityspanning a period of over20 years from 1979to 1999, and for continuing efforts to fosterfriendship and understanding between the people of Japan and of the United States. 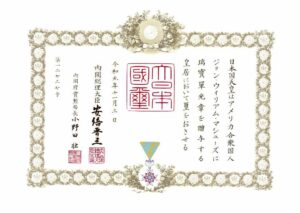 Great Seal of State of the Nation of Japan

The Emperor of Japan confers upon John William Matthews, a national of the United States of America, the Order of the Sacred Treasure, Silver Rays. In witness whereof, the Seal of State has been affixed to these presents at the Imperial Palace.The 3rdday of the 11thmonth of the First Year of Reiwa [Imperial Reign of Emperor Naruhito] (2019)(signed:) Shinzo Abe, Prime Minister of Japan [seal of office](signed:) Hiromu Onoda, Director-General of the Decoration Bureau, Cabinet Office [seal of office](at bottom center:) [a graphic of the Decoration of the Order of the Sacred Treasure, Silver Rays][certificate border: Imperial Chrysanthemum Seal; Paulownia Crest of the Nation of Japan]